WATCH: The epidemic has given digital retail a boost. Vietnam’s digital economy is forecast to grow to $52 billion by 2025, luring e-commerce giants like Alibaba and Amazon. Bloomberg’s @ngxuanquynh reports from Hanoi.

Weaving through congested Ho Chi Minh City on his Honda motorbike, Ho Duc Quang zips past a statue of the city’s namesake revolutionary leader and the warren-like Ben Thanh Market to drop off toys, books and other packages to customers of online retailer Tiki.vn.

Quang, 25, needs to be quick, since Tiki guarantees two-hour delivery to its express service customers in Vietnam’s metropolis. He uses AirPods to let customers know he’s about to arrive, but there’s one thing slowing him down: Quang has to wait for customers to open packages and confirm everything is correct before speeding off on his next delivery. It’s a must for many Vietnamese still unsure if they can trust e-commerce merchants.

Quang’s race through the city of nine million people is part of a campaign to win over reluctant Vietnamese, many of whom are trying online shopping for the first time during the pandemic. It’s not an easy sell in a cash-based society where only about a third of adults have bank accounts, less than 5% own credit cards and most shop at mom-and-pop stores and traditional wet markets. 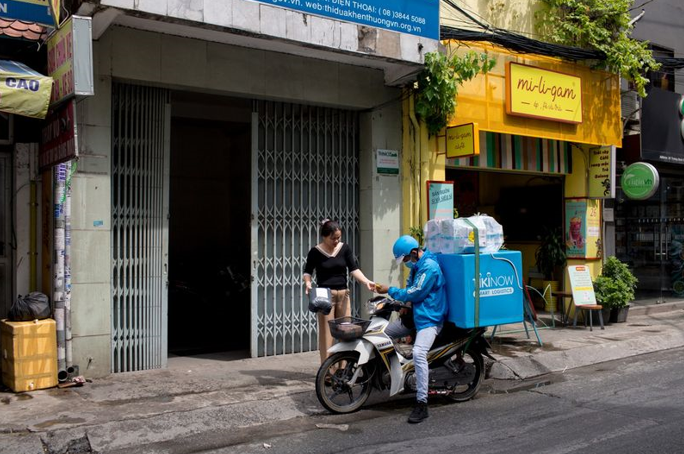 A Tiki courier delivers items to a customer in Ho Chi Minh city on May 24.

Though Euromonitor International estimates e-commerce accounted for just 3% of the nation’s retail market last year -- the smallest amount among Southeast Asia’s major economies -- the potential for growth is alluring. Vietnam’s digital economy is forecast to grow to $52 billion by 2025, an annual 29% increase from 2020, according to a study by Alphabet Inc.’s Google, Temasek Holdings Pte and Bain & Co.

Startups backed by Warburg Pincus LLC and JD.com Inc., regional players including Singapore’s Sea Ltd.’s Shopee and even Amazon.com Inc. are also targeting the country’s growing middle class. Between 2016 and the first half of 2020, investors funneled $1.9 billion into Vietnam’s online sector, the study by Google, Temasek and Bain showed.

“Vietnam is at the beginning of becoming a digitalized society with a young population that loves technology,” said Ralf Matthaes, managing director of Ho Chi Minh City-based Infocus Mekong Research. “So all these companies are tripping over themselves to offer these services.”

The government targets online shopping to account for 10% of Vietnam’s retail sales -- and as much as 50% in Hanoi and Ho Chi Minh City -- by 2025. Officials want to reduce cash payments to create a more transparent modern economy by increasing cashless payments for public services and improving the regulatory framework for e-payments.

A consortium led by Alibaba Group Holding Ltd. and Baring Private Equity Asia is investing $400 million for a 5.5% stake in Vietnamese conglomerate Masan Group Corp.’s retail arm. As part of the deal announced May 18, Masan will team up with Lazada, Alibaba’s Southeast Asia e-commerce unit. “The combination of Alibaba’s online retail expertise, Lazada’s e-commerce platform in Vietnam, and Masan’s leading offline network will be a strong catalyst to modernize Vietnam’s retail landscape,” Kenny Ho, Alibaba’s head of investment for Southeast Asia, said in a statement.

M-Service JSC, a Vietnamese startup that operates the MoMo payment app, in January raised more than $100 million from a group of investors including Warburg Pincus. MoMo’s registered users last year doubled to 23 million, said Nguyen Manh Tuong, co-founder of M-Service JSC, and the company forecasts it will have 50 million registered users in two years.

For the first time in their shopping lives, Vietnamese are being wooed with customer-first retail common in developed economies as dozens of e-commerce companies build loyalty among the nation’s growing middle class. 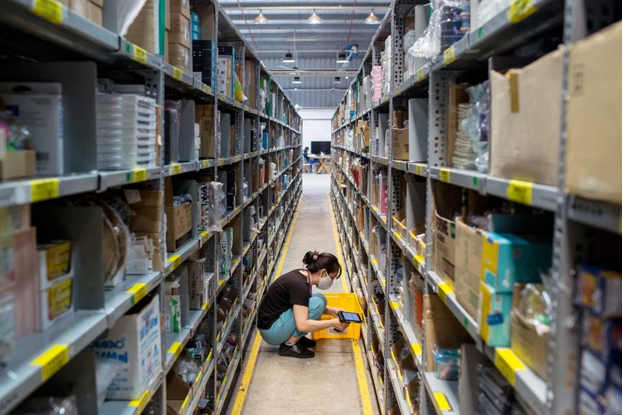 A worker scans and checks items on the shelves at a Tiki warehouse in Ho Chi Minh city.

Digital retailers are engaged in a courtship with shoppers wary of fraud and stores that traditionally eschew return policies. “Vietnamese are distrustful of what they can’t see,” said Hanoi-based economist Nguyen Tri Hieu. “Ordinary people need to see what they are buying. They need to smell it, touch it.”

“Usually customers have to go to stores to complain about low-quality products, sometimes even have arguments,” Chi said, “but still they cannot get anything fixed.”

Vietnam Wants to Leap From Gold Bars to Credit Cards 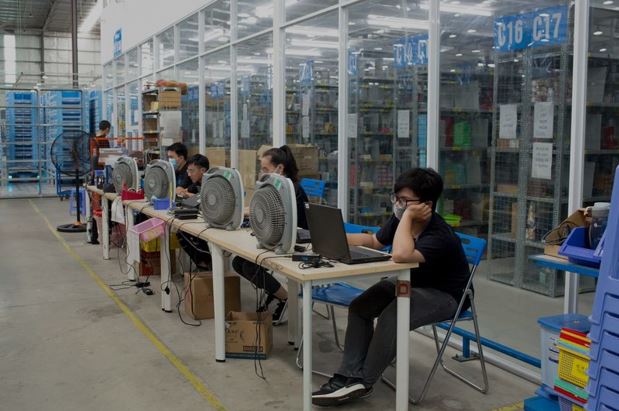 Tiki is the nation’s largest homegrown e-commerce site among dozens of local online shopping platforms, including some operated by retailers that have set up their own websites. Software engineer Tran Ngoc Thai Son launched Tiki in 2010 with $5,000. He wrote the code, purchased 100 English books from Amazon, and then delivered them on his motorbike.

As his company grew, so did efforts to attract consumers. Son deployed a system to weed out fake products and says Tiki will back legitimate customer complaints. “If there is a defect in, say, a new phone and the customer wants to return it, we support the customer 100%,” he said. “If the seller is not OK with that, we will turn off the seller.”

Investors including Sumitomo Corp. and JD.com have backed the startup with $192.5 million, according to Crunchbase. Son said he expects more funding rounds and plans an eventual initial public offering.

The startup handles just under two million orders a month, said Low, as workers stacked pallets with everything from boxes of diapers to cases of Corona beer in a 10,000 square-meter fulfillment center on a recent afternoon. Tiki is deploying artificial intelligence and robots capable of moving 800 kilograms of products to speed things along.

“It’s so fast,” Son said of his logistics system that looks to offer 500,000 products for two-hour delivery from 200,000 now, helping Tiki reach profitability. “Customers don’t have a chance to change their mind.”